When I was a child, I began to learn basic investigation technique and process from my father. However, the ways in which I learned the tools for my eventual profession took place not on the streets or by analyzing crime scenarios—it resulted from our fishing adventures.

[To read more about my work as an investigator, download my PDF booklet, El Jefe de los Jefes: A Life of Investigation.]

Our fishing hours routinely took place early in the morning or late in the evening. Our favorite stream for trout carried a “No Trespassing” sign, and the property owner occasionally rode his two-plus miles of stream, ascertaining that no one was violating his mandate. We would check out his corral when we wanted to fish, and if his horse was there, we would fish a section of the stream where we could see the corral and the horse. If the horse disappeared, we would head for the nearest exit. For two years we lived in a house that bordered his property.

I recall one evening when we were fishing directly below the neighbor’s house, standing in the shallow waters of a hole which ran close to the bank and to a large willow tree. I was about twelve years old. Suddenly I heard the sound of the horse coming towards the creek and to me. However, I apparently was not in sight of the landowner, and he crossed the stream a few feet above me. The horse splashed water on me as it crossed the creek, and as they disappeared to the east, I headed quickly for the fence nearby—quite frightened, as it was rumored that he carried a bull whip with which to threaten anyone caught fishing on his land.

Years, later, while serving in the US Army, I was stationed in Washington, DC, Korea, and Germany. I explored fishing possibilities in all of the stations, including Korea. Korea was not that promising; fishing was much better in Europe, where I fished in both Germany and Switzerland. Being a fan of Ernest Hemingway, I fished in several of his haunts, and the trout fishing I ran into in those locales was amazing!

After my military duty, I took on investigative assignments in the Los Angeles/Long Beach area, and on one of my assignments, followed an individual who went to the Seal Beach pier to fish for bat rays. As I watched these anglers catch and release the “rays,” I was hooked on learning the process from them.

My first hookup on a large ray was a definite learning experience. I had just bought a  new Penn 4/0 reel (black side plates) and—not really knowing the function of the drag system—I clamped my thumb down on the line as it was being stripped off. This caused several painful fishing line creases on my right thumb which remained for numerous days. Needless to say, I never did that again, the experience taught me how the drag on a reel operates.

After eleven years, I had caught well over three hundred rays in California waters (off the Old Coast Guard Dock in Newport Beach, Long Beach, Seal Beach, and San Diego. Friends and I also ventured down to Estero Beach in Baja Norte. The largest ray weighed in at 235 pounds. 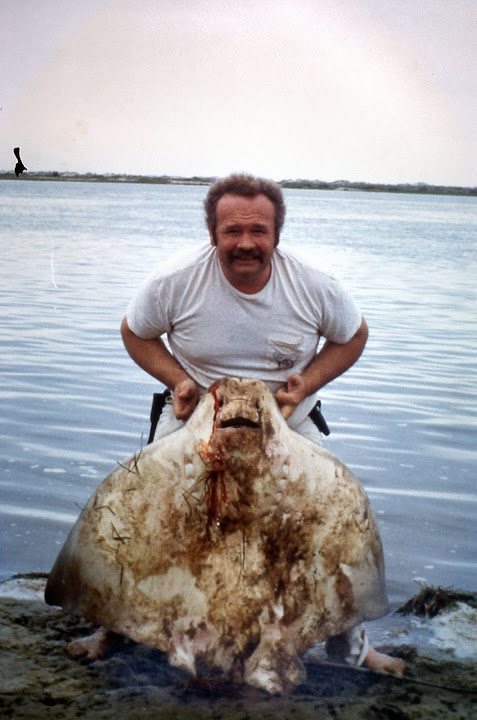 In 1973, once again on an investigative assignment, I discovered the region of Cabo San Lucas at land’s end on the Baja peninsula, approximately 1100 miles south of San Diego.

It was not until the winter of 1977 that I fished the area which became known as the East Cape. I had driven through the area, seventy-five miles north of Cabo San Lucas; however, it was hardly noticeable as I returned to the La Paz airport to fly back to San Diego.

After three trips to the East Cape, all in winter, I learned that the wind and rough seas were predictable for the winter months, and that calm waters could be found from May to October. I never fished the winter after that! Despite the wind and rough conditions, I did catch my first marlin on the third trip.

At this point, I began my investigation into the best times, best moon phases, best boats, and most experienced skippers. As the years passed, and I traveled south more frequently, I met and befriended many of the local youth; they eventually became deck hands and, later, skippers.

In the early 1990s, I instituted competition between the crews, captains, and deck hands that fished for the groups I recruited for trips to the East Cape. The winners among these locals were awarded trophies and cash awards–just as were the anglers. This created competition and professionalism, and our fish counts rose significantly. Instead of just another day of fishing with customers they might never see again, they now were competing for bragging rights as well as mementos.

Because of the crews’ efforts, anglers who had never caught a bill fish or—in some cases, a big game fish—were very successful, and we reached a success rate of 90+% of anglers’ catching their first fish on their very first trip.

My personal highlight came in June 11, 2010, with a one hour and two minute battle with a blue marlin, weighing 451 pounds. I did not have to guess the fish’s weight as, unfortunately, he lunged under the boat and hit the prop. I had released several fish as large as this one in the past, but this time got a good photo.

Fish with Me has recently introduced a free trip for any angler breaking one of our existing fish species records on any given Fish With Me at the beautiful Buena Vista Beach Resort. Located also in the East Cape—and where I caught my first marlin when the resort had only nine rooms and three boats—the resort now offers sixty-five rooms and over twenty boats.

As Fish With Me approaches our 100th “Dark of the Moon” trip, below are listed the fish totals from 1986 to and through our 98th successful fishing trip in June 2011.

Our Record Fish in Pounds

HOW WAS YOUR LAST BIG GAME FISHING TRIP?

Come and take advantage of my years of investigation into the best places to catch all of the fish listed, and ask me about my guarantee—something unheard of in the world of big game fishing!