John Kaeser of Seabeck , Washington was awarded the Free Trip in 2012, shown here with the VanWormers General Manager, Eddie Dalmau.

John’s score of 519 points from the June event held up. John and his partner, Mike Totey, Albany, Oregon took Top Team monies for this event with 451 points.

Vic and his partner Al Aronofsky of Stockton, California, were the 3rd place team.

The highlight of the fall event had to be the hooking of 4 Blue Marlin,  by three anglers. A double hookup resulted in loosing one of them, as they went opposite directions. The other three were brought to the boat and released. They all were between 220 and 260 pounds.

Dom Reale, Lacey, Washington caught his very first Blue on day 2 of the competition 0050
helping him take 3rd place angler and 2nd place team awards. This was Dom’s first trip on
a Dark of the Moon event and he caught a Striped Marlin and 3 Dorado on Day 1. 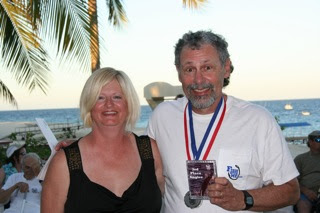 Melissa Debord, Saginaw, Texas presented the monies and trophies. Melissa celebrated her birthday and recent marriage to the lucky Robert Debord. Melissa was the Top Rookie, hooking her first Marlin and catching 2 Dorado.

We received signups and deposits as the Fall event ended. Don’t miss this celebration and great fishing. The VanWormer Hotels will be giving away another free fishing trip in 2012 and any angler breaking an existing fish weight record can win a free trip. Register today!