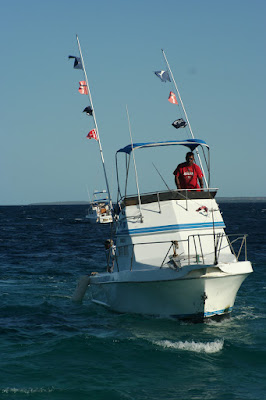 As this Cruiser returned on the first day, it was obvious we were going to have a great trip. 2 Blue Marlin and 2 Stripe Marlin. This was the first day For what turned out to be our Top Angler and Top Team.

Roland Martines shown here with Karin Abbott Hall and Mike Totey was that Top Angler, adding another Stripe Marlin and a Sail Fish on Day 2. Roland will be 92 in January and can put a fish to the boat in record time.

He was joined here by his partner Steve Spies as they accepted Top Team Honors. They finished Third in the June, 106th trip where Roland caught the first of his three Blue Marlin for the year.

Roland scored 340 points as he tried for the free trip in 2016, supplied by the VanWormer hotels, but he fell 32 points short.

Michael Sheridan traveled the farthest to attend this event.  He is from Shelton Notts, UK and is traveling about the world fishing.  He released a Marlin and caught 6 Tuna. We hope he returns again next year and shares his fishing adventures with us.

The release of Razor Back Turtles has become an annual event and we were able to assist in the release of 500 on Halloween eve, just before Dark.

We did not have any Rookie Anglers on this trip who were looking to catch their first Bill Fish and we will hope there are several next May.